I did not know that. Be interesting to see if (how) they keep anti-Wardites out of the queue. Here's the flyer: 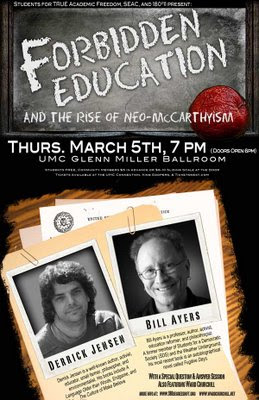 He has such lovely crinkly hair (Jensen, not Ayers). (Click for largo.)

Accompanying text at the 180 Degree site:

Students for TRUE Academic Freedom, the 180 Degree Shift at the 11th Hour, and the Student Environmental Action Coaliton [sic] are hosting an event in conjunction with Ward Churchill's landmark academic freedom lawsuit against the University of Colorado. Churchill's legal suit for violating his first amendment rights begins March 9th. Therefore, we are bringing well known activist-scholars Derrick Jensen and Bill Ayers to voice their strong support for Churchill and political dissent in academia. Their presentations will unveil the mask [sic] of liberal academia and link Churchill's fight with other scholars who have been attacked for their strong beliefs. If we want our universities to embody [sic] institutions of critical inquiry, then we must not only support scholars such as Ward Churchill, but also view these attacks in context. Come and hear the shocking truths behind the right-wing attacks on Churchill. Hear what they don't want you to know!

Aw shit, they're charging for this kreppenfest? Heartening, though, to see that the flyer says nothing about any of the money going to the costs of Ward's defense.

180 Degree Shift at the Last Hour (180DSatLH) is a typical student-rad trainee group with the usual infighting:

Beginning with the WAAKE-UP! Coalition, 180*11 emerged as part of a new Coalition after the beginning of the 2003 Iraq War, called RISEUP.

WAAKE-UP: World Awareness and Action Koalition of Equal United Progressives. These guys have a way with acronyms.

However, because of the intensely organized and hierarchical nature of the group which created massive burnout, in addition to the defacto leader's insistence on becoming a paid non-student organizer and his scandals over multiple romantic relationships with other organizers and students, the coalition fell apart, as almost did 180*11. However, 180*11 rose from the ashes and went on to work with other groups and host many events and provide many services. Highlights not listed bellow [sic] include partnering with Student Worker to bring M1 from Dead Prez to CU with nearly 400 students in attendence [ditto], allying with the Coalition Against Sweatshop Abuses in a successful 14 day hunger strike . . .

Update: In the previous post commenter "Heidi" notes today's Boulder Daily Gamera story on the event (jeez, I had it weeks ago), and particularly former CU ethnic studies instructor Ben Whitmer's comment (3:48 p.m.) to some anti-Chutchites (though the one who made the "boot party" comment (2:46 p.m.) was actually a Chutch supporter):

Hey, captainendeavor and jester1c, I’ll be at the event, and I know some other people who’ll be there too. Please, come on down and try to throw you [sic] “boot party”. We’d be happy to feed you your testicles.

Nice. Can't understand why CU got rid of the guy.

Update II: So can one assume, then, that Benjie deplores the Bush shoe-throwing incident?
Posted by Focko Smitherman at 4:20 PM