Didn't notice at the time that the satellite the Norks launched earlier this month (straight into the Sea of Japan) was going to beam patriotic songs back to earth:

What, no "General Inspects Drill Ground"? No "Let's Sharpen Our Bayonets to Annihilate Enemy"? Well, maybe they at least stowed aboard a copy of "leader Kim Jong Il's famous work 'On Bringing About a Signal Turn in Potato Farming.'" 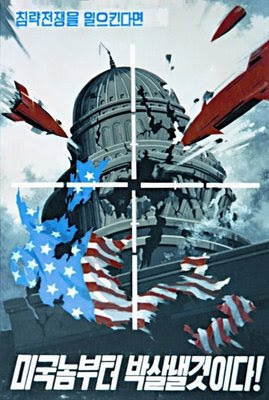 "When provoking a war of aggression, we will hit back, beginning with the US!” (Bet you didn't know I was fluent in Austrian.) (Poster via the California Literary Review, which has several good ones.)

All right, just one more: 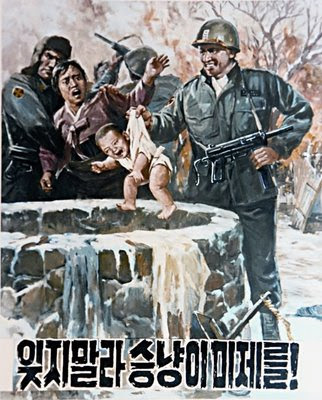 "Do not forget the U.S. imperialist wolves!"
Posted by Focko Smitherman at 5:45 PM