To the Churchill verdict from almost everywhere blogulous and otherwise.

Kids Prefer Cheese: "Is this a great country, or what?"

Body on the Line: 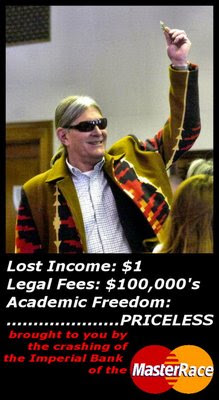 CU students: "Who?" (via Michael Roberts at Westword):

Speaking of the Chutch-leaning Roberts: "Should Ward Churchill be celebrating? Probably."

By Any Means Necessary:

I myself greatly disagree with Churchill (and I have stated as such many times on this blog, including in this piece), but I also feel that this case would have been slippery slope should he have lost and would have given right-wing inquisitors more impetus to go after other professors in the US who hold unpopular views. Who would have been next? Noam Chomsky?

The League of Ordinary Gentlemen:

1. Ward Churchill is an asshole.

2. He was actually correct in saying, in his notorious essay “Some People Push Back: On the Justice of Chickens Coming Home to Roost” and subsequent interviews, that the idea that the victims of the World Trade Center attacks on 9/11 represented some sort of cross-section of American life or the American public (much asserted following the attacks) was inaccurate. . . .

The verdict itself is a step in the right direction. Whether it will actually serve to deter universities from going on similar politically-motivated witch hunts in the future remains to be seen (let's just say I'm not exactly holding my breath).

Seems like the correct result, though the token damage award raises some puzzles about what the jury was thinking. You can see earlier coverage of the Churchill case on this blog here.

It’s not exactly international law, but he was my professor at CU — one of the very best I ever had — and, in order to rule in his favor, the jury had to find that a majority of the Regents used his infamous 9/11 essay as a “substantial or motivating factor” in the decision to fire him. So I think there’s a nexus.

I’m delighted at the outcome, although the jury’s award of $1.00 in damages is puzzling. The real issue is whether Churchill will be reinstated at CU, which is up to the judge, not the jury.

My first thought is that Ward should've ended up owning the damned school.

My second thought is that, miracle of miracles, the jury found in his favor.

My third thought is that the System can still screw him, should the judge not reinstate his CU professorship.Without a doubt, the most poetic punishment would be for Ward to go back to work for the weasels who can't stomach his challenge to their comfort zone.

Put simply, Chuchill wasn’t fired because he compared the 9/11 victims to Nazis. He was fired because that comparison drew scrutiny to his less-than-honest academic record. A jury may now have ruled otherwise, but that doesn’t make it true. Churchill is plainly guilty, in my humble opinion, of egregious instances of plagiarism and outright fabrication. Wikipedia has a nice summary of the charges.

It’s a little unbelievable that the taxpayers of Colorado are apparently going to have to start paying this idiot’s wages again.

Huzzah! to the Good Professor!

Oh, and Charlie Brennan of the now defunct Rocky Mountain News, which led this hateful attempt at character assassination, please go fuck yourself forthwith - with the largest rolled up newspaper you can find. Bad dog! You have always been a loser and a coward and you always will be.

Today you and all your witch-hunting scum have gone down in much deserved flames. Prepare to be forever humiliated for your lies. Fuckers.

JB on the Rocks (motto: "Whoever said laughter is the best medicine never had a case of gonorrhea"): "With luck, he'll never see the inside of a college classroom again."

Well, he got fired, he sued and won a judgement that is pretty much worth as much as he is! $1 O.K, actually, he is worth less than a buck, He is a vile, pathetic waste of skin.

Weasel Zippers: "I might have to go wail on a few hippies to make myself feel better . . . ."

Why, oh why, are liberals represented in the national media by their more obnoxious, dubious members? Remember Ward Churchill (who is or is not part-Native American) and his 9/11 victim/Nazi comments? Oh, right, because mainstream media loves a good mud fight—and so do journalisimo hacks like Hannity, Rush, O’Reilly, Olbermann.

A good number of years after I had graduated from the University of Washington, I learned that I had been a bona fide documented victim of plagiarism, committed by an historian for the U.S. National Park Service who -- completely unbeknownst to me -- had literally published verbatim, under his own name in an internal NPS journal that was not in public circulation, a paper I had once written for an undergraduate U.S. history class.

His own wife had been my professor for that class, and to this day I don't know whether she had offered the paper to him, or whether he had lifted it from her when she brought it home to read and grade (she gave me an A).

Nevertheless, I do know that she never said anything about it contemporaneously to the act, but a number of years later decided to use it against her husband during some particularly bitter divorce proceedings. She exposed his intellectual larceny to his bosses at the NPS, who in turn contacted me about it.

They fired him. Better be nice to Truthforce, Ward.

Alan Colmes had nothing interesting to say.

“While we respect the jury’s decision, we strongly disagree. It doesn’t change the fact that 21 of Ward Churchill’s faculty peers on three separate panels unanimously found he engaged in deliberate and repeated plagiarism, falsification and fabrication that fell below the minimum standards of professional conduct. The jury’s award is an indication of what they thought of the value of Ward Churchill’s claim. We will examine our legal options.”

WSJ: "But if [Churchill] was hoping to sock it to the university for firing him, he surely left the courtroom disappointed."

One more from Westword:

And what better place [for Wart after the rigors of the trial] to loosen your mind than at The Psychedelic Experience: Rock Posters From the San Francisco Bay Area, 1965 to 1971 at the Denver Art Museum, which is just blocks from the Denver County Courthouse. The show, which opened March 21, features more than 250 posters of experimental artwork from the era.

Update: The pirate who wears a pigeon in a parrot suit on his shoulder ("coo, matey") has some other reactions, including a lie (what else?) from some gink at Counterhunch.

CU's O'Rourke spent day after day backing up the university's charges of plagiarism and other scholarly crimes against Churchill -- a presentation that press accounts characterized as boring, but which Newill describes as "pretty interesting." In the end, however, she wasn't entirely convinced that Churchill had committed sins against academia. "I definitely saw where [the university] was coming from on a few of them," she concedes -- but in other instances, "I thought they had really weak arguments. To me, it just seemed like the charges were trumped up. And even if all of those things were true, we didn't feel that was the reason for termination."

Looking back on the trial, Newill admits to respect for Churchill's willingness to take an unpopular stand. "This was a truth to him that he sent up, and he defended it even when the whole country opposed it," she says. "I feel it takes a lot to do that, whether we agree with him or not. It takes a lot for somebody to step out and go against the grain like that."

Update V: No idea why Slappsy Maxie's bit o' photoshop (or rather, whoever he stole it from) keeps disappearing. Something wrong in the code, I guess.
Posted by Focko Smitherman at 5:05 PM