Is please go away:

It was John Lennon's birthday, so a peaceful time was guaranteed for all.

Peace, in fact, was breaking out all over Civic Center Thursday as the Imagine Peace Paint-In drew hundreds of the curious and pacifists to hear music and talks, including one from May Pang, the ex-Beatle's former companion.

"I was watching the movie The U.S. Versus John Lennon and saw the great things John and Yoko did for peace," said organizer Dana Cain. She quickly began recruiting not only Ono's support, but her friends in the artist community.

"The live bands followed. That was Yoko's idea. Yoko helped me name it, which was cool."

The free event was to raise awareness about the alternative to war [peace, in case you forgot--ed.], and at least three booths dedicated to Democratic presidential candidate Barack Obama were on site. The Imagine Peace Foundation's Aleta Antoinette, of Aurora, donated 50 T-shirts to the Department of Peace campaign.

"I started the foundation about five years ago," Antoinette said. "I had a grandson and just decided I wanted to do something to put more peace in the world."

I'd settle for more peace and quiet in the world, Antoinette, hint, hint.

Art students from around the metro area were bused in by the dozens to watch artists create and play with stilts and hula-hoops. A solar-powered bubble tour left soap bubbles drifting across the perfect fall afternoon.

Art students? Like, art students in high school? Grade school? Hmmm. And no, I'm not looking up what a "solar-powered bubble tour" might be.

Pang addressed the crowd of more than 500 at noon, telling them Lennon would have appreciated this gesture on what would have been his 68th birthday. She got a rousing cheer when she urged everyone to vote.

But for whom, May? For whom?

One of the first to sign on with the event was Peace Together of Boulder, which produces T-shirts with messages of peace.

"We really felt like we had to stop complaining [yeah, sure--ed.] and do something positive," said founder Bobbi Benson. "John Lennon had a lot of very wise words and wise things to say about peace. I think we can all learn from that." . . .

Brainyquote Lennon. Eh. A few are funny, hardly any are wise, and none of those are about peace. Fave: "If everyone demanded peace instead of another television set, then there'd be peace." 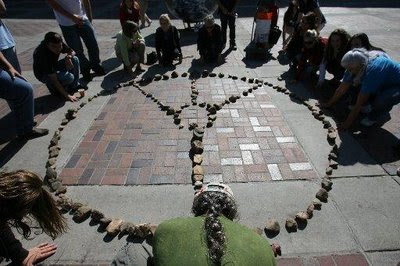 Walter Cronkite, by the way, has gone completely bonkers. Here he is on the need for a Department of Peace.

Update: Paula Scabdul joins Walter in urging the creation of a DoP. I bring this up only to boast that I have never, ever seen a single episode of American Idol. Ever. Not one.

I knew Clay Aiken was gay, though.

Update II: But I really want another television set.
Posted by Focko Smitherman at 12:29 PM