The Post has this photo of Denver's newest piece of public art: 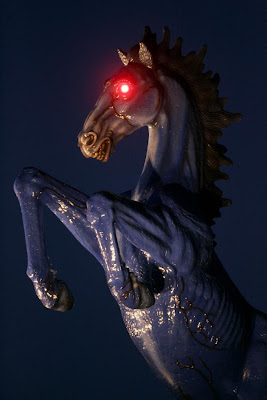 The sculpture [Mustang], designed by the late artist Luis Jimenez, was installed Monday on a dirt mound between the inbound and outbound lanes of Pena Boulevard, before the inbound road branches off to the east and west terminals [of DIA]. The mustang's creator, Luis Jimenez, was killed in 2006 when the torso portion of the sculpture swung out of control and fell on him while it was being hoisted in his New Mexico studio. The 32-foot-tall rearing blue fiberglass horse with fiery red eyes left California on a flatbed trailer late last week and arrived at its new home at Denver International Airport on Sunday. (photo by Barry Gutierrez)

Commenters are calling it "the horse from The Exorcist," "Satan's stallion," "the ring-wraith horse from Lord of the Rings" and (my favorite) "Death."

Update: I predict that this horse (and the noble mound of dirt on which it sits), will some day be a World Heritage Site.
Posted by Focko Smitherman at 10:37 PM