Only yesterday our newish little dog Josie was the picture of health, cheerfully ripping out Billy Bob's throat because he said he preferred Laika to Lassie: 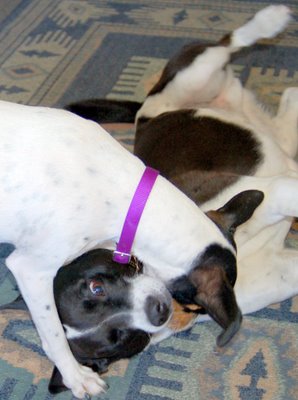 Now look at her: 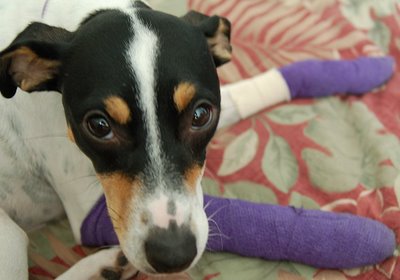 Makes you wanna cry: She has a splint on her right leg and a bandage on her left.

We have no idea what happened. She was out in the back yard and when she came in both her front legs were bleeding in roughly the same spot, just below those useless pads dogs have on the back of their legs. At first the emergency vet thought Josie had been burned. She hadn't, but she cut the tendon in her right leg bad enough to require surgery.

The only thing we can come up with is that the little nitwit somehow got both her paws caught in some chicken wire strung around the flower beds (to keep the dogs out), and cut herself getting loose. Problem is, the chicken wire seems undisturbed. Also, lots and lots of dogs have hung out in that back yard, many of them dumb even by dog standards, and none has ever managed to do anything like that.

Whatever happened, it's not gonna happen again. 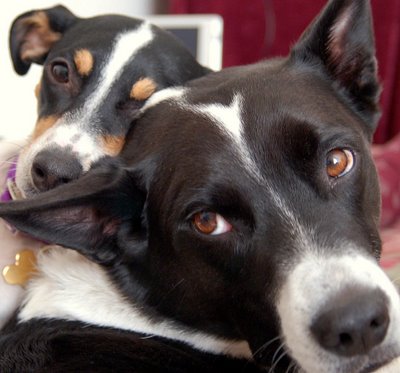 Not if Billy Bob has anything to say about it.

Update: Yes, the surgery etc. was unbelievably expensive. We thought about having Josie turned into a tiny area rug instead, but the vet said that would cost just as much, so what the hey.
Posted by Focko Smitherman at 6:22 PM