A 37-year-old Louisville woman filed a harassment report Sept. 16, insisting several men are following her. The woman, who describes herself as a conservative political activist, feels she's being targeted because she helped organize a rally at the Democratic National Convention. She said she noticed several men following her around town shortly after she posted information about the rally on a political Web site she maintains. The woman took pictures of the men and posted them on the site in an effort to help identify them. She stated this is not the first instance she's been targeted for her political beliefs. The woman claims former CU professor Ward Churchill threw "poisonous gas" in her face as she was exiting a store in Broomfield in 2006.

Sounds paranoid to me. Wart probably just breathed his black-toothed ciggie breath on her.

More: "Dan the Man" (real original, Dan) at Yourshlub saw this pic of a bank robber dubbed for unexplained reasons BOB and commented: 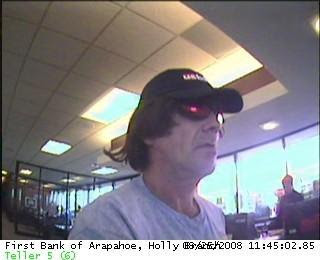 People shrink as they get older, Dan.
Posted by Focko Smitherman at 5:33 PM