In other t-shirt news

A tongue-in-cheek t-shirt poking fun at Democratic National Convention protestors is selling fast and creating some minor controversy along the way.

The shirts were created and distributed by the Denver Police Protective Association, the union that represents most of Denver's 1,400 police officers.

The front of the black shirt shows the number "68" with a slash through it. One of the primary protest groups at last month's DNC in Denver called themselves "Recreate 68," harkening back to the violent, 1968 political convention in Chicago.

I did not know that.

The back of the shirt features a menacing-looking police figure, wearing what looks like a Denver police badge and helmet and clutching a baton. He's looming over the city of Denver along with the slogan, "WE GET UP EARLY, to BEAT the crowds." Also written across the back of the shirt is "2008 DNC.' 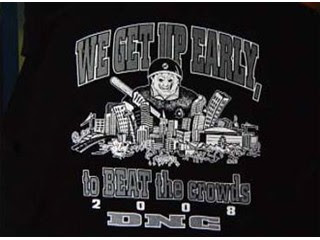 One CBS4 viewer, Seth Barnett, contacted the station to complain about the shirts, writing they "are a terrible representation of our city and its police." Barnett, a 21-year-old college student, called the shirts "disrespectful," saying they seemed "like a low blow."

Barnett said he was appalled by the shirts and wrote Denver's mayor and the police department to complain.

The Denver police detective who produced the shirts, Det. Nick Rogers, says he has received no complaints until now. He said the shirts are being sold for $10 each at the Police Protective Association Offices. . . .

They went on sale following the convention and he said every Denver police officer was given one free. Beyond that, he said officers from other departments like Lakewood police and the Jefferson County Sheriffs Department have been clamoring for the shirts and have ordered dozens more. He said after the initial printing, there was so much demand he had to reorder more shirts.

CBS's story might force another reorder. Or two. If the DNC had been a bloodbath (h/t Benjie), the shirt might, I admit, be a little crass. The fact that not a single protester was actually beaten, though, makes it all in good clean fun.

Update: "No charges for cop who shoved protester":

A Denver police officer caught on tape shoving a Code Pink protester to the ground during the Democratic National Convention won't face charges, according to Denver District Attorney Mitch Morrissey.

An investigation found that Alicia Forrest, 24, refused to back away as protesters crowded police during the arrest of a protester Aug. 26. A Rocky Mountain News video captured Officer Scott Stewart shoving the woman with his baton and saying, "Back up, (expletive)," as Forrest collapsed. Before the camera panned to the shove, police can be heard telling people to "Back it up," and Forrest can be heard saying, "Do it again."

"(Forrest) failed to comply with repeated lawful police orders to move back," said the DA's office. "She then grabbed an officer's baton, pushing it away. The officer pushed back, using the baton, and the woman fell to the ground."

Update II: The Rocky has more:

Forrest referred questions to her attorney, Dan Recht, when contacted Tuesday for comment on the DA's decision

"It's outrageous that the Denver DA would choose not to file assault charges against the officer who struck Alicia Forrest," Recht said.

"The incident was caught on video by a Rocky Mountain News cameraman and clearly shows the officer bashing Alicia with his baton in what can only be described as an excessive use of force."

But Kimbrough said that the video clip wasn't the only evidence in the case.

"The completed investigation included information was provided from witnesses at the scene, the officer and the woman who was involved," she said. . . .

Recht said he doesn't believe that the district attorney's actions Tuesday would affect Forrest's criminal case, which he is hoping to have dismissed.

"The issue remains whether Alicia will bring a civil suit against the officer, and that has not been determined yet," he said.

Not been determined yet? If it's so clear-cut, why not?
Posted by Focko Smitherman at 4:52 PM