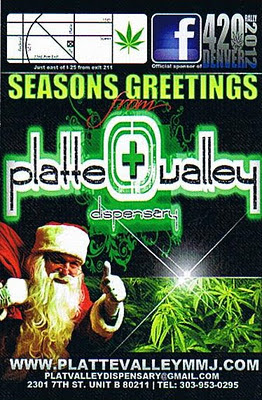 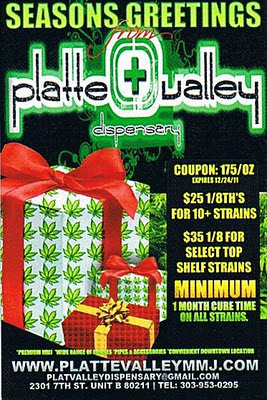 There are at least half a dozen medical weed dispensaries within a half mile of here. The handy-dandy Weedmaps.com shows that the Denver metro area has tons of them; the Denver Channel said a couple of years ago that they outnumbered Starbucks by almost two to one--390 to 208. (This doesn't seem to be borne out by the weedmap, which shows many fewer than that. Stoners.)

If the d-blog were that type of person, he would point out that the medical marijuana biz is a total scam, a (fig?) leaf to cover pot sales to anyone at all, and thus an encouragement to disrespect of the law in general and etc. But since he's not that type of person, the d-blog also won't urge Colorado to just legalize the shit, already, collect the tax windfall, pay off the deficit, and STFU.

Update: Funny how Santa looks just like a biker I used to see hanging out at the Love to Drink Inn.
Posted by Focko Smitherman at 1:13 PM