According to the Telegraph, that's what Rick Perry called the malevolent dwarf in a press release. Gad.

The MD, by the way, is lookin' stylish in his commie-preferred airtight (?) glass box: 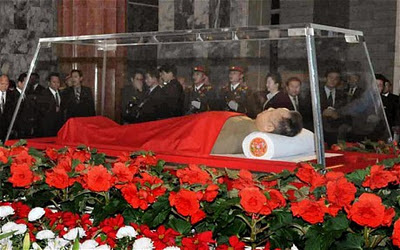 His funeral isn't until the 28th, almost two weeks after he croaked. Mmmmm, rotty.

The Telegraph, by the way, is breathlessly live- (sic) blogging the shitstain's death, including a link to news.com.au's roundup of allegedly funny internet reactions ("As we speak, George Lucas is digitally adding Kim Jong-Il to the celebration scene in Return of the Jedi," one wag tweeted. Meh.).
Posted by Focko Smitherman at 6:23 AM