Do they still use the pic of the fat twins on minibikes?

The world's oldest dog according to Guinness World Records has died in Japan at the age of 26 years and eight months. 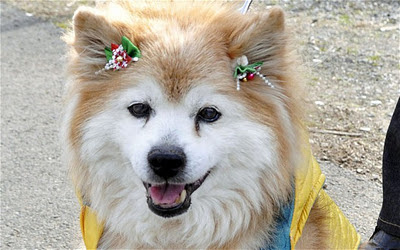 This pic, likewise, was taken in December, 2010. Hard to believe.

Owner Yumiko Shinohara said at her home in Sakura, a city outside Tokyo, that Pusuke, a fluffy tan Shiba mix, died on Monday after suddenly falling ill and refusing to eat.

Shinohara told TV network FNN that she "would just like to thank him for staying alive so long." The report said Pusuke's life span would have been the equivalent of about 125 years for a human.

The report (I guess they mean the GWR thing) appears to use the formula that the first two years of a dog's life count as 10.5 human years apiece, with each year thereafter counting as four human years. Using that metric, this calculator comes close.

According to the Guinness Book of Records, the dog was born April 1, 1985. Pusuke was recognized as the world's oldest living dog last December. The Guinness record for canine longevity is 29 years, set by Bluey, an Australian cattle dog who died in 1939.

Australian cattle dog, eh? So is Billy Bob! In fact, using the calculator, I see that Billy is only about 65 years old. That sounds about right, poor lumpy thing. Oh, here's the PLT (the D-a-W calls him "GGB"--"Grotesque Growth Boy") at the Pa-in-Law's at Thanksgiving: 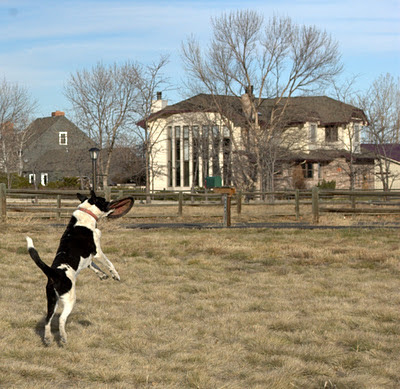 Yes, another frisbee shot. Note: GGH (Grotesque Growth House) is not the pa-in-law's. His is much less, uh, magnificent. By the way, you can see one of BB's (harmless) fatty lumps just over his right shoulder. It's about three-quarters the size of a tennis ball. Ewwwww!

Update: The T's sidebar "News Most Viewed" column looks rather inter--well, you decide:

Police force invites tenders for £70,000 of sandwiches (your, or rather their, government in action); and

Update II: Fat twins on minibikes (actually small motorcycles) as they appeared in the Guinness Book of Whatever way back when. Now available on t-shirts suitable for any occasion!
Posted by Focko Smitherman at 8:10 AM