Over on the latest open thread at Biased BBC (always edifying reading) a commenter on the way to some other point says he doubts "there was even a minor skirmish fought by the allies to liberate any death camp" in World War II.

Hell if I know, but his comment reminded me of Felix Sparks, the former Colorado Supreme Court justice who, as a 27-year-old lieutenant colonel in April, 1945, headed one of the first American detachments to enter the German concentration camp of Dachau. In a speech at the U.S Holocaust Museum in 1995, Sparks recounted the experience, first noting that:

I have before me a document prepared by the Institute for Historical Review, Costa Mesa, California. It can be purchased from that so-called historical institute at a price of $2.00 for ten copies. This so-called document professes to prove that the Holocaust never happened. It asserts that there is no evidence to prove that any member of the Jewish faith was ever persecuted or died at the hands of the Nazi Government of Germany. Among other things, it is claimed that gas chambers and crematoriums were constructed after the war as tourist attractions. . . .

I beg to disagree with the authors of this totally sick and false literature. I am in a good position to disagree. . . . Shortly after I had launched an attack against the outer defenses of Munich, I received an order to immediately proceed to the Dachau Concentration Camp. I knew nothing about the camp, nor had I ever heard of it.

Our first experience with the camp came as a traumatic shock. The first evidence of the horrors to come was a string of forty railway cars on a railway spur leading into the camp. Each car was filled with emaciated human corpses, both men and women. A hasty search by the stunned infantry soldiers revealed no signs of life among the hundreds of still bodies, over 2,000 in all.

It's a short speech, maybe because Sparks, understandably, doesn't mention (though his audience surely knew) what happened next, as recounted in a riveting story in the Boston Globe:

The word went out at Dachau [among the American soldiers]: We'll take no prisoners here. A machine gun was set up. Scores of captured acolytes of Hitler's Third Reich were herded into a dusty coal yard and lined up against a stucco wall.

Then American gunfire crackled. Germans fell. Officially, at least 17 were killed. Eleven other Germans who had surrendered were shot in two other locations at Dachau that day, according to records and interviews.

Sparks, alarmed by the sudden machine-gun burst, raced back to the coal yard, firing his pistol in the air and furiously signaling with his left hand for his men to stop shooting. . . . 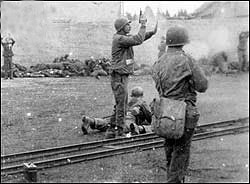 Felix Sparks.
Read the whole thing. I met Sparks a couple of times when I worked with his wife Mary at the Colorado legislature back in the 90s. He's almost 90 himself now, and sick, but there are some who are trying to secure him one more honor, this for an earlier act of heroism:

[B]efore he dies, his buddies want to give the "soldier's soldier" a final tribute: the Distinguished Service Cross, the second-highest medal, next to the Medal of Honor, for saving three wounded GIs during World War II. . . .

In the past 19 months, the 27-year-old had slogged his way through the bloody battles in the torturous caves of Anzio, Italy - where he was one of only two men in his company to survive. He had already earned a Silver Star for bravery and two
Purple Hearts after being shot through the stomach and having his liver lacerated by shrapnel. Since landing in North Africa nearly two years earlier, he had bonded with a group of farm boys from Colorado, and watched most of them perish. . . .

Read the rest of that, too.