Having both bitched and moaned about all the snow last winter, I must now give a hearty handshake of achievement to Gaia for the spring she's put on in Denver. It's been wonderfully wet and cool. Here's the weather story in today's Post and the picture "accompanying" (as they say in the newspaper trade) it. 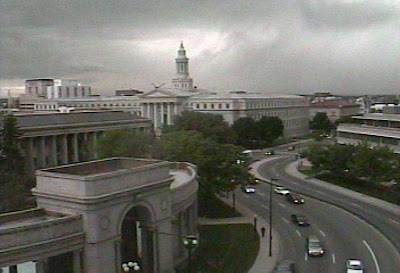 Beautemous. It looks like the photographer (uncredited) just pointed a camera out the window of the Denver Post Building. That's the Colfax Avenue entrance to Civic Center Park lower left, some other neo-classassical building midway left, and, in heavenly glow, the City and County Building, rear.
Posted by Focko Smitherman at 9:48 PM