State and Denver Zoo officials Monday were increasing precautions to prevent an epidemic after a capuchin monkey at the Denver Zoo died of plague last week.

Zoo officials learned late Friday that the 8-year-old animal that died Wednesday tested positive for the disease, according to a zoo statement. More than a dozen squirrels and at least a rabbit [at least a rabbit?] have been found dead in the City Park area just east of downtown, which includes a golf course, the zoo and the Denver Museum of Nature of Science.

The monkey, which was acting lethargic the day before, was found dead Wednesday by a zookeeper.

Plague is common in Colorado during this time of year, but it usually occurs in rural parts of the state, where it’s sometimes discovered when entire prairie dog colonies die off. Plague was identified last year in wild animals from 25 Colorado counties, but it is unusual for the disease to spread into metro areas, said state Health Department epidemiologist John Pape.

Pape was unsure how the monkey was infected, though he and zoo veterinarian Dr. David Kenny suspect the primate ingested the carcass of a dead squirrel that carried the disease, based on normal monkey behavior.

And you thought it was language that separated us from the other primates. Well, I for one can say with almost total confidence that I have never "ingested" the carcass of a plague-raddled squirrel.

"We see it every year in wild rodents," said Pape. "But it’s uncommon circulating in tree squirrels in urban neighborhoods, including metro Denver."

No other animals, including the other 17 capuchins, have shown any signs of illness, but as a precaution, the monkeys have been taken from their usual "island" display and placed in a separate caged display for observations.

"It’s a first time occurrence at the zoo, as far as we know," said Kenny.

Though the chance that a human could be infected remains minimal, Pape said it’s more important than ever that people take necessary precautions now that the disease has occurred in the city. . . . 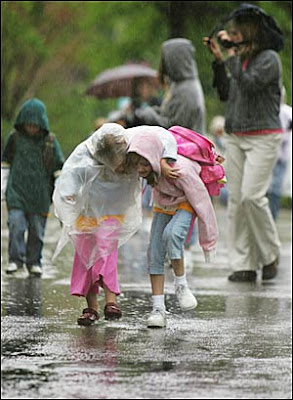 "Webhart Elementary School students Maryia Schmidt, 7, left, and Daniella Sundquist, 7, both from Cheyenne, Wyo., huddle against a rain shower during a field trip to the Denver Zoo on Tuesday afternoon."
Wonder what they had for lunch?
Posted by Focko Smitherman at 10:15 PM