Pelicans, generally speaking, are fairly weird birds at their best. Here, however, are a couple of rather normal looking American White Pelicans at the Denver Zoo. 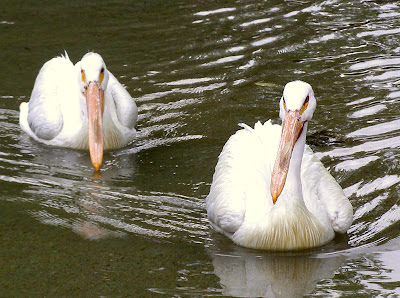 Normal looking, that is, until they turn and show their profile: 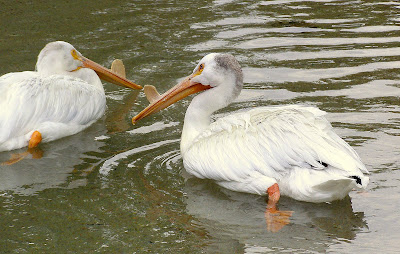 They've got big bumps on their beaks!
Thinking that this was a pretty weird looking thing, even by weird bird standards, I googled "pelican bump beak" to find out more about it. I learned that the bumps appear on both males and females during mating season. They basically communicate, "I'm hot for you, honey!" which is certainly what I had thought the big guy was communicating to me as I snapped his photo.
Here's another American White with even weirder bumps. This one is from the Edinburgh Zoo. Unfortunately, I did not take this picture, although I have been in Edinburgh. DrunkaHusband and I got married in Edinburgh, as a matter of fact. We'll have to tell you about that some time... if you ask very nicely.
Here's a lovely post about the ever-so-much-more-beautiful Australian pelican.
BTW, I took the pelican pictures at the Denver Zoo last summer, as part of an "incentive" trip in a program I was running to help teenagers quit smoking. Here's a picture of a few of my victims, during a little break from walking around the zoo. It gives you an idea of how successful my stop-smoking program was. 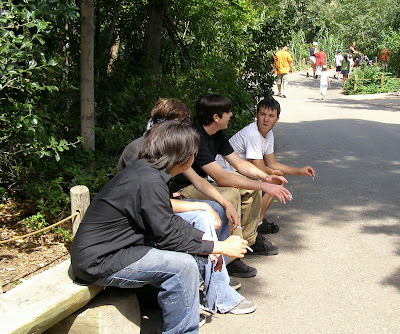 Not very.
Posted by Focko Smitherman at 12:01 AM