In the Chronicle of Higher Education, Peter Wood has part one of his look at the American Association of University Professors' draft policy "aimed at creating new procedural safeguards to protect faculty members from unjust interference with their expression of political views." He is not impressed.

Well, maybe a little impressed, above all with the completely uncontroversial (not to say boring) finding that, as he quotes the draft (fetchingly titled "Ensuring Academic Freedom in Politically Controversial Academic Personnel Decisions"),

All academic personnel decisions, including new appointments and renewals of appointments, should rest on considerations that demonstrably pertain to the effective performance of the academic’s professional responsibilities.

the [academic freedom] “controversies” to be addressed arise almost entirely from “political intrusion” from outside the university. They are concerned, in so many words, with an assault on liberal academia by “talk‐show hosts, bloggers, and well‐funded interest groups” (p. 1) who put “untoward pressure on the university.” The AAUP’s task at hand is to defend academic freedom from this ignorant mob.

Did I put that link in the wrong place? (Checking.) Nah. Unfortunately, Wood says, the AAUP is concerned solely with this kind of attack, ignoring controversies that arise when professors become advocates in the classroom and the poor ill-educated public, instead of just shutting up, responds (usually, at least in my case, with derisive laughter and finger-pointing). For Wood,

This is the central folly of this report. It presents a double standard. When someone outside the university speaks about campus matters, it is in the AAUP’s view illegitimate “pressure.” When someone inside the academy speaks, it is enlightened opinion. “Academic freedom” is construed by the AAUP as a firewall. Those inside can aim their weapons at those outside with impunity, but if those outside respond in anything other than humility, they offend against this fine principle.

Read whole thing, for it is not bad. Wart is mentioned, is in fact, according to Wood, sort of the (mostly tacit) poster primate of the whole report. Good quote: "It is [hard] to see Ward Churchill in the light of someone whose commitment to the scientific method and the long view offered a “check on the hasty and unconsidered impulses of popular feeling [as the report claims the academy generally does].” Professor Churchill, to the contrary, famously photographed lofting a rifle, exemplifies a certain kind of appeal to those very impulses." 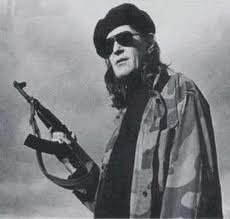 Update: The profs under attack Wood mentions at the beginning are a pretty interesting bunch. The D-blog, by the way, is also potentially evangelical. Hubba-hubba.
Posted by Focko Smitherman at 8:22 PM